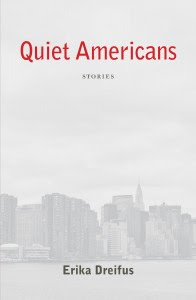 Erika Dreifus lives and writes in New York City. She is the author of Quiet Americans: Stories, which was recently released by Last Light Studio Books. Please learn more about Erika, her book, her blogs, and her newsletter for writers at www.erikadreifus.com.
Posted by B.J. Epstein 2 comments:

Subbed vs. Dubbed: Where do you stand?

This is a guest post by TeachStreet writer Kenji Crosland. TeachStreet is a website dedicated to providing local and online classes, including foreign language classes in languages like Spanish and French.

There’s a lot lost in translation: humor, depth, and sometimes even the basic meaning of words themselves. Although great translators can manage to capture the spirit of the original, it can take them years to do so. I have even heard of some translators spending days pondering the nuance of a single phrase! Because of strict deadlines, however, film translators don’t have that kind of luxury, and thus the translations aren’t as good as they could be.

A very clever joke in English, for example, might go flat when translated into Japanese. With time, a translator might be able to think of a way to make a joke work, but usually they can’t. I had this experience myself when I watched the movie “Dodgeball” in Tokyo. I must have laughed out loud several times at intervals when the crowd was silent. It was not until I had read the subtitles that I realized why. Oftentimes certain jokes weren’t translated at all, and were replaced with lame Japanese jokes that were similar in nature but failed to hit the punchline.

I was able to forgive the translators their terrible work because I knew just how difficult a job it was. A year or two back I had read a Japanese news article (Sorry, the title escapes me) about how hard it is to translate for movies. You can’t have subtitles crowding half the screen, so you’re limited to a certain amount of characters (just like twitter). When the actors are talking rapid-fire, sometimes you have to cut out part of what they’re saying from your translation just to keep up with the flow. Jokes, which often require cultural and linguistic context, often don’t stand a chance.

If you’re dubbing, however, you have a little more freedom. Although dubbing has a bad reputation in the States because the voice acting for most dubbed movies is horrendous and the words often appear out of sync with mouth movements, we must remember that the budget simply isn’t there to make dubbing better (by hiring better actors, sound technicians, etc). When done right, however, dubbing can be a good alternative to subtitles. First of all, you’re able to add more colloquial language which can be less stilted than subtitles. If you have a comedian voice actor, for example, they might be able to ad lib a joke or even use a certain voice inflections which carry a joke’s meaning much more effectively than a stale sentence would. Furthermore, although you have a time limit, you have no character limit, so you may not have to cut short dialogue in order to fit the screen.

Personally, I haven’t seen many good dubbed movies myself, although some animated movies seem to do a fair job at it. I have heard it’s possible, however. I can’t speak for myself, but a friend of mine told me that the dubbed Italian version of the first Spiderman movie was done so well it was hard to tell that they weren’t the original voices.

If I had a choice, I’d probably choose subtitles over dubbing most of the time. In some movies, however, the subtitles can be so distracting from the action that you’ll spend more time reading than actually watching--especially when you don’t know one word of the original language (I had this experience with “Crouching Tiger, Hidden Dragon”).

My guess is that most people prefer subtitles to dubbed movies. I’m wondering, however, if the vote wouldn’t turn out differently if more time and money was spent improving the quality of dubbed films. So what do you think? Subbed or Dubbed?
Posted by B.J. Epstein 7 comments:

I received the following press release not that long ago, and I thought it represented a positive step forward for translation.

Words without Borders announces a $44,000 grant from Amazon.com to fund translator and author costs.

Words without Borders is a nonprofit organization and monthly online magazine dedicated to the translation, publication, and promotion of literature in translation. Each month we publish eight to ten new pieces of literature in translation from around the globe. The grant will cover the author and translator fees for all twelve issues of Word without Borders: The Online Magazine of International Literature in 2011, including an upcoming issue on Pashto and Dari literature and works by winners of the Russian Debut Prize. Amazon.com’s grant provides significant and much-needed operating support to the organization and allows Words without Borders to raise its payments to authors and translators.

This marks the fourth grant from Amazon.com to Words without Borders. It is the largest grant they have awarded to any organization to date.

Alane Salierno Mason, WWB’s founder and president, stated, “Amazon.com’s ongoing support has been critical to our financial health. This most recent grant not only provides major support for the organization’s financial foundation, but allows us to do just a bit more for the authors and translators whose work forms the heart of Words without Borders.”

In addition to WWB, Amazon.com has awarded grants to a diverse range of not-for-profit author and publisher groups dedicated to fostering the creation, discussion and publication of new writing and new voices, including the Council for Literary Magazines & Presses, Milkweed Editions, Poets & Writers, WriteGirl, 826 Seattle, The Loft Literary Center, Voice of Witness, Seattle Arts and Lectures, The Moth, The Kenyon Review, Richard Hugo House, Artist Trust, Hedgebrook, Copper Canyon Press, Girls Write Now, Lambda Literary Foundation, the Association of Writers & Writing Programs and the Alliance for Young Artists & Writers. A number of the recipients- such as Open Letter, Ledig House, Archipelago Books, the Best Translated Book Award, Pen American Center, and the Center for the Art of Translation- are, like Words Without Borders, committed to supporting the international exchange of literature and the work of translators and foreign authors.

Words without Borders is grateful for the continued partnership with Amazon.com and their ongoing work to support literature in translation.

Founded in 2003, Words without Borders is a 501c3 nonprofit organization that has translated over 1,200 pieces of literature and poetry representing 80 languages by writers from 111 countries. WWB has been featured in the New York Times, the New York Times Book Review, the Boston Globe, the Guardian (UK), Vanity Fair, and the Chronicle of Higher Education, as well as in various foreign-language papers and numerous literary blogs. We were selected as a featured “pick” by Yahoo immediately after our launch issue and voted one of Time magazine’s “Fifty Coolest Websites” in July 2004.
Posted by B.J. Epstein 3 comments:

Here’s another market for you to check out.

Happy new year! What are your translation goals for the upcoming year?

There is a wonderful Swedish novel that I think deserves to be published in English. I am working on translating an excerpt from it and I hope to see the excerpt published by the autumn. I also hope to work with the author on finding a publisher in the UK or the US, using this excerpt.

Anyone else?
Posted by B.J. Epstein 2 comments: